Is Alcohol a Gateway Drug?

The Gateway Drug Theory, which is based upon decades of research, suggests that teen substance abuse begins with alcohol and tobacco and then progresses.

Underage drinking is common. In fact, 2019 statistics1 show that nearly one-fourth of teens aged 14 to 15 had at least one drink that year. Given the high prevalence of teen drinking, many experts have questioned whether alcohol is a gateway drug. Research in the area of addiction science provides some answers, and the Gateway Drug Theory is at the center of much of this research.

What Is the Gateway Drug Theory?

The Gateway Drug Theory2 states that when teens experiment with substances like alcohol, tobacco and marijuana, they later go on to abuse more addictive drugs like cocaine, heroin and amphetamines. Based on this theory, many researchers have studied how using drugs or alcohol at certain ages can lead to substance abuse and addiction in adulthood.

The idea behind Gateway Drug Theory3 is that certain drugs serve as a gateway for the use of other drugs, in a specific sequence. More specifically, substance abuse begins with a legal drug like alcohol and proceeds to illicit drugs like cocaine.

History of the Gateway Drug Theory

The Gateway Drug Theory began with several studies conducted in the 1970s2, which showed that teenage drug use followed a specific sequence. This sequence began with alcohol and cigarettes and then progressed to substances like marijuana, cocaine and heroin during adulthood. Research in the early 2000s focused on the effects of drugs on animals and found that the use of one drug makes the effects of other drugs stronger. Other studies conducted during the 2000s demonstrated that early marijuana use was linked to increased use of other illegal drugs.

Denise Kandel5 is often credited with developing the Gateway Drug Theory, as she and her colleagues conducted long-term studies showing that there is a specific sequence that teens follow when initiating substance use. Her work, which was published in 1975, showed that teens begin by consuming beer or wine, progress to using tobacco and hard liquor and then begin using marijuana. Illegal drug use follows the initiation of marijuana use, according to Kandel’s research.

Is Alcohol a Gateway Drug?

Given the premise of the Gateway Drug Theory, which says that teens progress from using legal substances to abusing illicit drugs, researchers have focused their attention on alcohol as a potential gateway drug.

One recent study4 involving U.S. 12th graders found that the majority of participants who had used multiple substances tried alcohol before beginning tobacco or marijuana use. The study also revealed that people who began using alcohol in sixth grade were more likely to have used illegal drugs during their lives when compared to those who began drinking in ninth grade or later.

Additional research2 has shown that using alcohol at age 15 increases the risk that someone will inject drugs during adulthood, offering further evidence of the Gateway Hypothesis. Altogether, the research provides5 a large body of evidence suggesting that alcohol use begins prior to the use of illegal drugs. This suggests that alcohol is, in fact, a gateway drug.

Alcohol is frequently cited as a gateway drug, but it is not the only substance that is thought to lead to the use of illegal drugs down the road. These substances are also labeled as gateway drugs.

There is a large body of research5 showing that youth often begin smoking before transitioning to the use of illegal drugs. There is also evidence7 that nicotine primes the brain for addiction to other drugs by increasing the release of the brain chemical dopamine, which makes drug use feel pleasurable.

Do Gateway Drugs Actually Lead to the Use of More Dangerous Substances?

Based on the available research, there is some evidence that the Gateway Drug Theory is true. However, while some studies do support the Gateway Hypothesis, the research is mixed9. For example, a recent study10 found that it isn’t necessarily that gateway drugs directly lead to the use of harder drugs; rather, it is teens’ attitudes toward drugs that explain the Gateway Drug Theory. In the study, having a more accepting attitude toward drugs was linked to the use of harder drugs. The study’s authors concluded that after using gateway drugs, teens may become more accepting of hard drug use and then begin using illegal drugs.

Teens who progress from alcohol, tobacco and marijuana use to the use of illegal drugs may simply be in an environment that is more permissive of drug use. They may also be genetically vulnerable to substance use, so they begin experimenting early with alcohol, tobacco and marijuana and then progress to harder drug use over time. Studies9 have also shown that there are cross-generational effects, where a parent’s use of gateway drugs increases their child’s risk of using amphetamines and heroin.

In summary, there is plenty of research evidence showing that gateway drugs like alcohol and marijuana increase the risk that teens will use harder drugs like cocaine. However, this doesn’t necessarily mean that alcohol or other substances classified as gateway drugs directly lead to the use of more dangerous drugs. Substance use and addiction is complex, and there are multiple factors that contribute to the risk of illegal drug use.

Use of alcohol, tobacco and marijuana can increase the risk of future hard drug use. These gateway drug statistics11 show how much the risk of illegal drug use increases with gateway drug use:

These statistics suggest that teens tend to progress from alcohol and tobacco use to marijuana use, which then increases the risk of future hard drug use. However, it’s important to keep in mind that not all teens who use marijuana progress to illegal drug use. As the National Institute on Drug Abuse12 (NIDA) explains, most marijuana users do not go on to use hard drugs. Instead, it may simply be that people who have more risk factors for drug abuse begin with readily available substances like alcohol and marijuana.

Other Risk Factors for Illicit Drug Use

Gateway drugs may increase the risk of hard drug use among people who are already vulnerable to substance abuse. Beyond the Gateway Drug Theory, these risk factors13 can explain why some people use hard drugs and others do not:

Environmental factors, such as growing up in a home where parents use drugs or having parents who have a positive attitude toward drug use, increase the risk of using illegal drugs. Teens who have poor parental supervision are also at increased risk.

Teens are at increased risk of illegal drug use based on certain factors related to school and peer relationships. These include association with peers who engage in delinquent behaviors, low school performance and disconnection from school.

Regardless of whether alcohol is a gateway drug, the truth is that alcohol abuse can lead to addiction. Some people may have an addiction only to alcohol, while others may progress to the abuse of other substances. If you are seeking treatment for addiction to alcohol or other drugs, The Recovery Village Cherry Hill at Cooper offers a full range of addiction treatment services.

We offer comprehensive drug and alcohol rehab in South Jersey, and we are qualified to treat co-occurring mental health disorders like anxiety and depression. Our full range of services includes medical detox, inpatient rehab and outpatient care. Our 90-bed inpatient facility offers a multitude of services, including individual and group therapy, medical support and case management. Amenities found at our rehab center include a fitness facility, yoga room, entertainment lounges and basketball and volleyball courts.

If you or someone you love is struggling with substance abuse and addiction, help is available at The Recovery Village Cherry Hill at Cooper. Contact us today to verify your insurance or begin the admissions process. 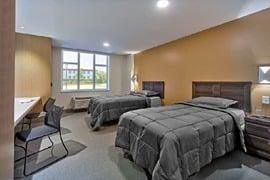 Read More
Editor – Jonathan Strum
Jonathan Strum graduated from the University of Nebraska Omaha with a Bachelor's in Communication in 2017 and has been writing professionally ever since. Read more
By – Jenni Jacobsen, LSW
Jenni Jacobsen is a licensed social worker through the Ohio Counselor, Social Worker and Marriage and Family Therapist Board. She has seven years of experience working in the social work field, working with clients with addiction-related and mental health diagnoses. Read more
Alcohol abuse related topics:
Loading...
Is Alcohol a Drug? Yes, and Here’s Why Alcohol Abuse vs. Alcoholism Mixing Drugs with Alcohol Can Be Dangerous What is End-Stage Alcoholism? Alcohol Poisoning and Alcohol Overdose Divorcing an Alcoholic: Is Alcoholism Grounds for Divorce? Living with an Alcoholic What is a Functioning Alcoholic? Alcohol Addiction Treatment and Rehab in New Jersey How to Taper Off Alcohol
All Related Topics
Sources
Medical Disclaimer

Get in Touch (856) 890-9449
Table of Contents
What Is the Gateway Drug Theory? Is Alcohol a Gateway Drug? Other Gateway Drugs Do Gateway Drugs Actually Lead to the Use of More Dangerous Substances? Other Risk Factors for Illicit Drug Use Treatment For Substance Abuse You Might Be Interested In
Related Topics
Reach out now